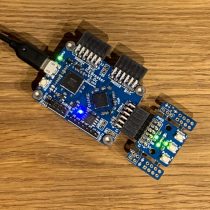 Fortunately a new era has begun: Open-Source FPGA toolchains! It was started some time back by Clifford Wolf, who first wrote a synthesis tool called Yosys and later reverse-engineered the bitstream format for Lattice iCE-40 FPGAs. Recently a new place-and-route tool called nextpnr was developed as well. END_OF_DOCUMENT_TOKEN_TO_BE_REPLACED

On my other two FPGA bords the 7-segment display is directly connected to the FPGA. The 4-digit 7-segment display has four anodes (one per digit) and eight cathodes (one per segment plus the decimal point) totalling in twelve pins. The display control has to be multiplexed within the FPGA. As the Pmod™ connector has only eight pins this kind of control mechanism would not work. So the most obvious alternative to send the data for pins serially and to use serial to parallel converters on the extension board. However I wanted to avoid using a lot of ICs on the boards so I went for an alternative approach: Charlieplexing. END_OF_DOCUMENT_TOKEN_TO_BE_REPLACED